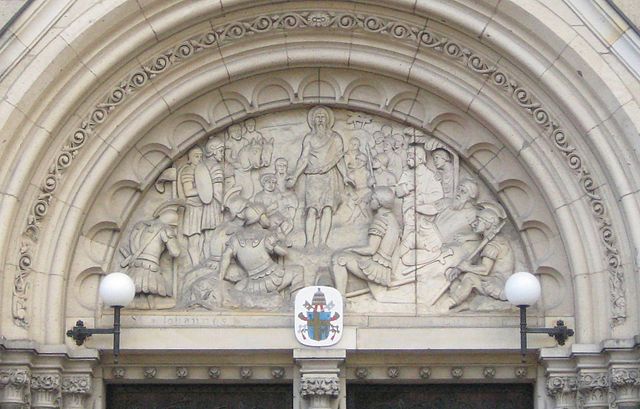 And the crowds asked him, “What then should we do?”
In reply he said to them, “Whoever has two coats must share with anyone who has none; and whoever has food must do likewise.”

Even tax collectors came to be baptized, and they asked him, “Teacher, what should we do?”
He said to them, “Collect no more than the amount prescribed for you.”

Soldiers also asked him, “And we, what should we do?” He said to them, “Do not extort money from anyone by threats or false accusation, and be satisfied with your wages.”

As the people were filled with expectation, and all were questioning in their hearts concerning John, whether he might be the Messiah,  John answered all of them by saying, “I baptize you with water; but one who is more powerful than I is coming; I am not worthy to untie the thong of his sandals. He will baptize you with the Holy Spirit and fire. His winnowing fork is in his hand, to clear his threshing floor and to gather the wheat into his granary; but the chaff he will burn with unquenchable fire.”

So, with many other exhortations, he proclaimed the good news to the people.    Luke 3:10-18

A society ill at ease, waiting for a saviour to redeem it, encounters the last of the prophets, coming from the wilderness. He preaches repentance and judgement, his extreme lifestyle giving credibility to his powerful words. Moved, the crowds ask him for guidance. “What then should we do?”

John’s response is a very practical call to generosity, honesty and justice. Those who have more than they need are to share with those who have less. Tax collectors are to be honest – and to avoid the practice of gathering more than is owed so that they can keep some themselves. Soldiers are likewise to be satisfied with their wages and not to abuse their power for personal gain.

His answers, which echo prophetic calls to justice throughout the Old Testament, fill the people with expectation – can this be the Messiah?

No, responds John: he is the precursor. He baptises with water but will be followed by one greater than he, who will baptise with the Holy Spirit and fire.

There’s an interesting symmetry between this passage and Acts 2, in which after the coming of the Holy Spirit at Pentecost, Peter preaches to the assembled crowds. Filled with the Holy Spirit, the apostle shares the message that the Jesus who was recently crucified has been raised from the dead and is Lord. Once again, the crowds are cut to the quick and cry out “What shall we do?”

Peter’s response is a spiritual one: “Repent and be baptized every one of you in the name of Jesus Christ for the forgiveness of your sins, and you will receive the gift of the Holy Spirit. For the promise is for you and for your children and for all who are far off, everyone whom the Lord our God calls to himself.”

But does that spiritual response mean that the old practical call is no longer important? Far from it. Rather, the disciples’ calling has been intensified in a way that flows from the transformation that God’s grace is working in them. “All who believed were together and had all things in common, and they were selling their possessions and belongings and distributing the proceeds to all, as any had need. And day by day, attending the temple together and breaking bread in their homes, they received their food with glad and generous hearts,  praising God and having favor with all the people. And the Lord added to their number day by day those who were being saved.”

The new community is one of the deepest contentment, thanksgiving, generosity and justice.

What of us, today? On the whole, our society – and often our lives and our churches – resemble the confusion of people coming to John in the wilderness more than the transformed community of the apostles. Whether it’s money, vaccines, food or access to education, our societies are riven with vast inequalities – and often a resistance to sharing. Corruption and violence make some wealthier, and others poorer. We see these things all around us … and all too often, we know them in our own hearts.

And so we, like the inhabitants of the Holy Land at the time of Jesus, need to hear both John the Baptist’s and Peter’s messages. At the very least, John tells us, share if you have more than you need, be content with what you’re owed, and don’t seek to take from others to enrich yourself. As a sign of your transformed life, Peter tells us, go even further – treat all goods as no longer ‘yours’ but for the good of all, pray constantly, praise God and be thankful.

How does this relate to Fair Trade?

In many ways, Fair Trade speaks to some of John’s commandments. When those of us who can buy Fair Trade products to meet our needs, we turn our back on the exploitation practiced in so much mass production and turn towards a model that involves cooperation, care for the environment, safe working conditions and better pay. In doing so, we may find ourselves having to buy less. Fair Trade goods don’t necessarily cost more – and are often similar to the costs of other brands. But they are also rarely absurdly cheap, unlike some of the goods we see in shops, because the Fair Trade price costs in sustainability for people and planet. When we buy Fair Trade we accept that – and we don’t try to get more than we should by shortchanging our neighbours or the earth.

But Fair Trade doesn’t just help us avoid exploitation. Ideally, it points us towards a transformed life in which all people are valued as precious, made in God’s image, and goods are shared so that no one is in need. Ideally, it reminds us of our mutual dependence on God, and helps us to see how right relationships – with God, the earth and each other – are more important than acquisitions … and the needs of our neighbours are more important than our ‘wants’. Ideally, it points us towards a transformed community.

Pray that God may guide us, so that we make choices that foster right relationships. Pray that God will give us the grace to live out our love of God and neighbour – following the greatest of commandments.

Fabulous Gifts under £10
Scroll to top