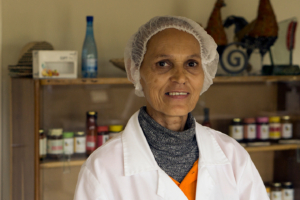 Mildred, a supervisor at Eswatini Kitchen in Swaziland, stands by a cupboard full of the company’s trademark jams, sauces, chutneys, and honey.

A quiet woman, Mildred is supporting not only herself and her mother, but also her late brother’s children as they go through school. She explains how Eswatini offered opportunities to an older worker – something she implies is not commonly the case – and how her career has grown over the six years she’s worked there. “They accepted me when I came here,” she says, relating how she started in the kitchen, but moved to the honey department and about a year later progressed to being its supervisor.

Eswatini Kitchen is one of the oldest and best established Fair Trade enterprises in Swaziland. Founded in 1991 by Manzini Youth Care, it was designed “to create employment for disadvantaged women and to provide a market for small local farmers and rural families who harvested wild fruit.”

From a small kitchen with a few employees, it’s grown through its association with Fair Trade into a business that even without operating at full capacity, employed (as of summer 2017) 23 staff year round. It creates a wide range of gourmet natural foods, some of which it sells locally, and some of which it exports – including to companies like Oxfam and Traidcraft in the UK, hoping to grow sales and expand further.

Eswatini’s growth has enabled it to provide its employees not only with wages but also a range of benefits, from help with transport (they run a bus to bring workers to the factory) to health education. The company also continues its mission to generate additional income for local communities in as many ways as it can. It now grows some of its own fruit – there’s a large mango orchard surrounding the factory – but it still buys in fruit and honey from local farmers and families. The wooden spoons, too, that go in the company’s gift packs are carved by people with disabilities in isolated mountain areas: Eswatini brings them wood and collects the carvings.

In a country like Swaziland, what Eswatini is doing matters. The tiny kingdom, surrounded by South Africa and Mozambique, has an unemployment rate estimated at over 25 per cent and an estimated 63 per cent of the population living below the national poverty line. Poverty in rural areas is a major issue – and businesses that can provide employment and income generation are limited.

Eswatini is part of a wider Swazi Fair Trade movement that is working to tackle these issues. The Swaziland Fair Trade organization (SWIFT) brings together 77 members who employ over 2,975 producers across Swaziland. Founded by five of Swaziland’s largest fair trade employers, SWIFT works on the World Fair Trade Organization’s ‘Ten Fair Trade Principles’ – which cover everything from transparency and accountability to providing a fair price, fair trading conditions, and good working conditions for all involved.

SWIFT emphasises that finding markets remains Swazi businesses’ biggest challenge – but states that buyers should look at Swaziland because they are producing high-quality goods that are genuinely competitive in the world market: “We are up to international standards” SWIFT’s Business Development Manager, Ayanda Sigudla, says.

The story of Fair Trade for her is that “the quality is never compromised” and that every person involved “from the person who goes to pick up the grass (for a basket) … to the person who starts painting it” benefits from the process and understands how their work fits into the whole. Like everyone involved with Fair Trade in Swaziland, she emphasises the skill and love put into products: “there’s love from the people of Swaziland from start to finish.”

When we visit the Eswatini Factory, I don’t need to be told about the quality of their goods – I’ve been eating them for years. (I’m a special fan of the lime pickle.) But talking to the Eswatini staff emphasises how each spoonful of an Eswatini product is making a far greater difference to people’s lives than one might imagine. It’s an inspiring thought … a reminder of how powerful the everyday decisions we make on purchases can be .. and yet another example of why Fair Trade matters.

This article, written by Maranda St John Nicolle, originally appeared in ‘The Door’