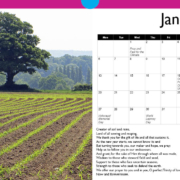 A note to our supporters

We hope that you have had a good Christmas and pray that this will be a New Year of blessings, most especially of drawing closer to God amidst the many challenges that face us and our world.

The new year is also the start of a new prayer email. Over the past few years, we made the decision to shift our focus slightly in order to do more direct work alongside churches in our core areas of Fair Trade and trade justice, care for creation and solidarity with refugees. We’re very excited by some of the resources, events and opportunities already produced and coming up – and hope you will be too. But time is limited – and it became clear that we couldn’t both do that work and continue to produce the prayer email in the format that we had. This led to the hiatus in the old prayer email – and to its reappearance now in a different and more sustainable format. We apologise for the break in the email, hope you continue to find the material useful, and would very much value your feedback.

Plough Sunday is on the 12th of January … here’s a prayer you may wish to use in your church or personal worship:

Creator of soil and rains,
Lord of all sowing and reaping,
We thank you for the gift of life and all that sustains it.
As the new year starts, we cannot know its end
But turning towards you, our maker and hope, we pray:
Help us to follow you in our endeavours.
And grant, for the sake of Him through whom all was made,
Wisdom to those who steward field and seed,
Support to those who face uncertain seasons,
Strength to those who seek to defend the earth.
We offer our prayer to you and in you, O perfect Trinity of love
Now and forevermore.

The Pray and Fast for the Climate January 2020 prayer points are out, looking back at developments over the past 18 months and forward to 2020. Items covered include the COP talks in 2019 and 2020, Australia’s bush fires, developments in electric vehicles, a groundbreaking case linking climate action and human rights … and more. Read them…

Northeastern Nigeria
The murder of eleven Christians by Nigeria’s ‘Islamic State’, a militia that splintered from Boko Haram, brought renewed attention to the often forgotten but still devastating conflict in northeastern Nigeria. It’s a conflict we should remember – and it’s important to pray for the people of that area. As of September 2019, the Red Cross said 22,000 people had been reported missing, of whom 60% were minors when they disappeared. Millions have been displaced, losing homes, communities, livelihoods and educational opportunities. Tens of thousands have been killed. Children have been kidnapped and forced into slavery, sexual exploitation, and use as child soldiers … even suicide bombers. While the government continues to fight the militias, a lack of resources and an unwillingness or inability to address some of the underlying issues in the area have impeded success.

Please pray that the hearts of those who seek conflict may be turned to peace, that the people of northeastern Nigeria may enjoy the fruits of peace,  that those who have suffered in their communities may find comfort and support, and that those who have been abducted may be freed, accepted back into their own societies, and helped to heal after trauma.  Pray especially for the work of churches in the area, asking God to grant members strength and safety and to bless their witness.

Background: Trained to Kill: How Four Boy Soldiers Survived Boko Haram  and a photo essay on the Chibok Girls who returned (both powerful – highly recommended),  How Boko Haram has regained the initiative and what Nigeria should do to stop it,  Boko Haram is back. With better drones, International Crisis Group coverage, Christian Solidarity Worldwide submission to 126th UN Human Rights Committee.

Boris Johnson has long advocated for folding DfID into the Foreign Office, on the grounds that it would avoid waste and ensure that aid cohered  ‘much better with U.K. political and commercial objectives’. Following the Prime Minister’s election victory, civil servants in both departments are reportedly working on proposals for the merger after Brexit, as well as proposals for how the two departments could work more strongly together while remaining separate.

100 leading development charities – including Action Aid, All We Can, British Red Cross, CAFOD, Christian Aid, the Mothers’ Union, Oxfam, Save the Children, Tearfund and World Vision – have issued a statement warning against a merger, noting:

“Merging DFID with the FCO would risk dismantling the UK’s leadership on international development and humanitarian aid. It suggests we are turning our backs on the world’s poorest people, as well as some of the greatest global challenges of our time: extreme poverty, climate change and conflict. UK aid risks becoming a vehicle for UK foreign policy, commercial and political objectives, when it first and foremost should be invested to alleviate poverty.”

The agencies are not the only ones speaking in favour of maintaining separate departments: policy experts and politicians, including some Conservatives, have also expressed reservations about a merger. One major concern is that a merger would lead to aid that was politically motivated, as happened before DfID was formed when, for example, aid was linked to an arms deal. Another concern is that, while it has its critics on both the left and the right, the independent department is generally very highly rated in terms of independence, effectiveness, impact  and transparency: the international campaigning group ONE ranked it 1st in the world in aid volume, quality, and targeting; and the 2018 Aid Transparency Index, rated transparency around UKAID delivered by DfID as ‘very good’ with a score of 90.3. The FCO’s record is not always as strong: for example, UKAID delivered by the FCO (about 30% of the aid budget is spent outside DfID) was rated by the index as ‘poor’ with a score of 34.3.  There are also concerns about the possible blow to Britain’s global standing if it is seen as being less interested in development,  difficulties in merging different cultures, and the impact of merging the departments on departmental experts’ workload in the year when the UK will be hosting the UN climate talks, and needing to draw on expert advice.

Please pray that decisions that are made around the fate of DfID will prioritise the needs of people at risk because of poverty and climate change and will ensure continued or improved effectiveness and transparency.

The Ebola epidemic in the DRC has, since its outbreak, involved 3.386 confirmed or suspected cases, and 2,233 people have died. The numbers of people suffering with the disease at any one point have been diminishing, but while the epidemic has abated, it has not disappeared – and a single person can inadvertently enable a flare-up, as happened recently when a taxi-driver relapsed, creating a chain of infection that involved 50 people. There are also concerns as the disease seems to be taking hold again in Butembo, which has seen hostility to health workers in the past, making prevention and treatment more difficult.

Please pray for all who have been affected, directly and indirectly, by the Ebola epidemic. Pray that health workers may be safe and able to work effectively. Pray more generally for an end to the violence and unrest in the eastern Congo, which is so destructive in itself and which creates environments in which disease can spread.

Our page on Ebola has further resources and prayer points. We’d especially recommend reading the inspiring and sobering story about Dr Shako, director of an Ebola response team.

Each year, CCOW produces a calendar of ‘Dates for Prayer and Action’ listing special Sundays, key upcoming events, and themed days/weeks/months. It’s one of our most popular resources, downloaded hundreds of times. The new one can be found here.

This year, however, we’ve also done a hard copy calendar, which  not only notes the dates but also offers photographs and a prayer or reflection for each month (sample here). If you’d like to receive one, please email us: if possible, we’d be grateful for a donation to cover the costs of the resource and postage (unless you are already a donor, in which case the calendar is our thank you!)

6 January – Epiphany/Theophany (Orthodox)
During the Epiphany season, could your church reflect on the journeys of the Holy Family following the Wise Men’s visit … and the journeys of refugees today?