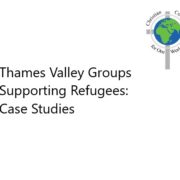 “Are not two sparrows sold for a penny? Yet not one of them will fall to the ground apart from your Father.” Matthew 10:29

This week’s Revised Common Lectionary reading from Genesis contains the story of Hagar and Ismael. Hagar’s human story – a slave given by her mistress as a slave-wife, rejected, and banished in a way that could put her and her child at risk of death in the wilderness – is a harrowing one of powerlessness, humiliation and loss. But in the eyes of God, she and her son are precious – and God both promises to protect them and does so.

This is the question we’re often asked with relation to support for refugees. Joanna Schüder, our Churches Refugee Networking Officer, is visiting with local groups that are supporting refugees – and is writing up some of their stories to show different approaches that individuals and groups can take.

The first of the stories – that of the Faringdon Syrian Refugee Group – is attached. We hope you find it interesting and inspiring.

Please pray for all who are already offering practical, prayer and emotional support to refugees. Pray that as a country we recognise the gifts that refugees have brought and continue to bring to our culture. And pray that as churches we work to offer support that witnesses to God’s love.