The Easter readings speak of the great joy of those around Christ at His resurrection, as they begin to understand what has happened. This week’s  Revised Common Lectionary readings show the next stages – the disciples continue to deepen their own understanding and begin to communicate the Good News with the wider world. Pray that we ‘who have not seen and yet have come to believe’ may deepen our faith in these Eastertide weeks – and may share that faith with others.

The first round of the French elections takes place this Sunday. Five major candidates are  running: the two who receive the most votes will go through to a second round of polling on the 7th of May.

Over the past year, many countries have seen campaigns and votes that broke with convention. The French election fits within this trend. The two major parties, which have governed the country since the establishment of the Fifth Republic in 1958, have lost voting share and may not be represented in May; candidates who have created new parties and movements are surging; and the polls show the top four candidates – François Fillon of Les Républicains (centre-right) , Marine Le Pen of the Front National (far right), Emanuel Macron running for his own party En Marche (centrist) and Jean Luc Mélenchon running for his own movement La France Insoumise (far left) – so closely grouped that it is impossible to predict who will go forward to the final round.

The election involves many specific policy issues (FT summary; Le Monde summary; Le Figaro summary) candidates differ on taxation and government spending, regulations on business and employment, the role of trade and globalisation, the nature of the public sector, immigration policy, approaches to national security, and social questions such as healthcare, housing policy, the role of religion and religious symbols, the nature of the family, and the structure and nature of the educational system. Underlying these – and often debated in themselves – are fundamental questions about national identity: should France be part of the European Union? Or not?  Who is ‘French’? Who is not?  What is the role of the past? What is the role of the state?

While the churches have refrained from endorsing any particular candidacy, they have been calling on their members to engage with the underlying issues, to vote – and to make their voting choices in a way that is consonant with their beliefs. Statements and study documents issued by the [Catholic] Bishops Conference of France (see below), French Protestant Federation (statement), and the National Council of Evangelicals in France (English summary; French study document) have highlighted what each group thinks are the main issues in question.

We are hugely grateful to the Roman Catholic deacon Jean-Claude Chipiloff, from the parish of Nuits-Saint-Georges in the Diocese of Dijon, who has shared the reflection below with us, to help inform our prayers:

In the Autumn of 2016, the Standing Committee of the [Catholic] Bishops Conference of France published a booklet called ‘Rediscovering the meaning of politics in a changing world’.

Chapter 7 of this document is called ‘The question of meaning’. Here is an extract:

‘Over the past fifty years or so, the question of meaning has, little by little, been abandoned in political discourse. Politics has become ‘managerial’, more the supplier and protector of ever expanding individual and personal rights than of collective projects. Management-type speeches have accompanied the advancement, growth and development of our country – but without concerning themselves with the ‘why’. Economic wealth and the consumer society have facilitated this marginalisation of the question of meaning.’

In a climate where politics is greatly discredited, twenty or so Catholic movements published on 13th April an opinion piece calling believers to ‘make their vote consistent with their convictions’ before the first round of presidential elections.

With less than a week to go before the first round of voting, I am very concerned about the way the campaign for this 2017 presidential election campaign is developing:

I have the impression that a certain number of my compatriots are withdrawing fearfully into their own shells. I feel that this is due to the lack of a long-term programme on the part of the different candidates. The president of the Republic is elected for five years. None of the candidates is promoting a plan for beyond five years. Politics has become a profession; it’s no longer seen as public service. As those who have recently served terms as presidents of the Republic have failed to restore hope to the French, more and more voters are turning to candidates who have never been elected to office. You’d need to be very clever to say who the two candidates in contention for the second round of voting will be …

I feel rather sad when I see what has happened to political life in France. But nonetheless, I continue to hope, as my country has considerable resources. It has always found a way to recover … and it will do so again. 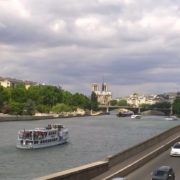